The year was 1929 and a tremendous late October storm was howling out of northern Lake Michigan. Dozens of ships labored to find safety in ports across the lake, however,  some chose to fight the storm and cross the 76 mile breadth of tumultuous seas between Wisconsin and Michigan. One such captain, aptly known as “Heavy Weather” McKay, made the decision to make a run for Grand Haven, MI from Milwaukee WI and risk his crew of around 50 men and his cargo of some 25 railroad cars loaded with Kohler bathtubs, Nash automobiles, barley, cheese, feed, canned peas, among other goods.

At 3:45pm on October 22nd, the 338 foot long car ferry SS Milwaukee of the Grand Trunk Railroad Company was spotted by the crew of the U.S. Lightship 95, a ship anchored 3 miles offshore serving as a lighthouse. They reported the SS Milwaukee to be pitching and rolling heavily as it disappeared into the storm heading east as 20 foot waves crashing over her steel hull.  This would be the last sighting of the car ferry before her remains were discovered on April 14th  1972 by legendary shipwreck hunters, Kent Bellrichard, John Steele and Roger Chapman in over 100 feet of water three miles off Fox Point, WI.

As part of this years ROV Days, our third expedition to the wreck in as many years was mounted on July 20th-21st 2009, where we brought students and the public to this local maritime landmark aboard Discovery World’s tall ship the S/V Denis Sullivan, under the command of captain Tiffany Krihwan.  One of the main objectives of this seasons expedition was to employ sophisticated imaging technology to continue documenting the wreck site, using Remotely Operated Vehicles, Sector Scanning Sonar and with SCUBA divers in the water to photograph and map the wreck using conventional underwater archaeology methods.  In addition to on board education about the history of the SS Milwaukee, the passengers were able to see and participate in legitimate underwater archaeology research from the deck of a replica 19th century three-masted schooner.

The Remotely Operated Vehicle used in this research was a VideoRay ROV, piloted by Patrick Rowe of Midwest ROV. Patrick was able to fly throughout the wreck and even enter confined spaces that were previously not recorded. Gauging by the excited reactions of those watching the wreck below us, it was a tremendous thrill and unique opportunity for the non-diving public to access this submerged cultural resource, which would otherwise be inaccessible.   The hours of ROV footage that has been recorded on this wreck provides an excellent archive of visual material to make sense of the wreck site and to document its slow decay as time goes by. 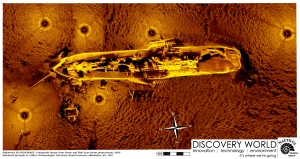 Sector Scan Sonar mosaic of  the wreck  and debris field

The Sector Scanning Sonar equipment was brought from Michigan by the Nautilus Marine Group led by Brian Abbott and David Thompson. This scanning system uses high resolution sonar technology to imaging the wreck site while sitting in a tripod on the lake bottom. By changing the placement of the tripod and the range to be scanned (30-200 foot radius) a shipwreck like the SS Milwaukee can be mapped in a matter of hours. We were able to get several very good scans of the wreck site, which picked up debris around the wreck that was previously unknown. The advantage of this system is that anomalies can be measured to the centimeter both in terms of overall size, but also how far off the bottom they are.  These data have resulted in the most detailed map of the shipwreck site to date. 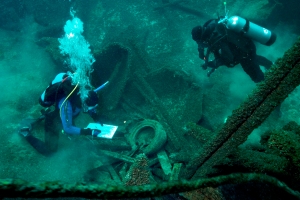 Finally, by actually diving down to the stern (back end) of the wreck allowed for a more vivid interaction with the wreck by measuring specific features, such as the car deck (30′ diameter) each propeller measured 12’8″ in diameter, a car tire at the stern had an overall diameter of 2’5″. This sea gate measured 5′ in height, but was likely not high or thick enough to withstand the incredible force of the swamping waves, which resulted in bending the gate in and thus flooding the crews quarters at the stern of the ship. After scraping away a two inch layer of zebra mussels, a large crack measuring 1’8″  was noted running down the port hull where the sea gate was attached. Based on this evidence and the crumpled state the sea gate is in as it hangs off the stern, it now seems probable that some of the railroad cars came loose smashed through the sea gate. In fact the remains of a railroad car can be seen beneath the enormous propellers, which tells us it sank to the bottom before the ship sank and landed right on top of it.

All together, this years human and technological “eyes in the deep” resulted in new information about the demise of the SS Milwaukee and current state of preservation. Moreover, by engaging the public in expeditions of this nature, it no doubt fosters a greater appreciation for our collective maritime history, while bringing awareness to the thousands of shipwrecks throughout the Great Lakes. It is because of these underwater museums that we owe a debt of gratitude to, for their efforts in fueling the growth of the American economy.